American Samoa at a Glance

Six Polynesian islands, below the Equator, comprise the southern-most territory of the United States.

It is believed that, the first people on the Samoan Islands came by sea from southwest Asia some 3,000 years ago.

Unlike many island resort locations in the South Pacific, American Samoa has striven to manage its resources and maintain its scenic beauty in the most pristine condition possible.

As zoning is very strictly enforced tall, high-rise hotels and condominium buildings are not allowed to be built on the waterfront.

The Samoan culture is Polynesia's oldest.

American Samoans have a rich language that remains the main language of the people. English is the second language - spoken by all the islanders.

Fa'asamoa has kept Samoans strongly nationalistic and suspicious to changes that might threaten the traditional structure of their way of life.

Samoan weddings are generally a huge social event. Following the wedding service, a reception is usually held outdoors, because there's a lack of large enough facilities in most areas.

The Capital City of American Samoa is Pago Pago

A collapsed volcanic crater makes an ideal deep-sea harbour for the capital of American Samoa.

Pago Pago airport is situated on the south coast of Tutuila Island, about 25-minutes drive from Pago Town.

The Samoan village leaders and the U.S. Congress have set aside the finest samples of the islands' land and seascapes as a national park.

National Park of American Samoa:
Located in Pago Pago, the two rain forest preserves and coral reef are home to unique tropical animals including the Flying Fox, Pacific Boa, sea turtles, and an array of birds and fish.

Out and About in American Samoa

American Samoa's islands are located in the heart of Polynesia, with Hawaii, Rapanui (Easter Island) and New Zealand making up the three points of the Polynesian triangle.

Tutuila is the largest and most populated island in American Samoa, with a rugged coast and few secluded beaches.

The mountain backdrop is steep and covered in tropical rain forest.

The Manu'a Group of islands lie about 100km east of Tutuila.

Ta'u, half National Park and spiritual centre of Polynesia, is the largest of the three islands (and furthest from Tutuila Island) but many travellers prefer the smaller islands of Ofu (wonderful sandy beach) and Olosega; which are conveniently connected by bridge.

Getting To and Around American Samoa

Samoa Airways flies from Pago Pago to Apia, in Western Samoa, with onward connections to Auckland, Brisbane and Sydney.

Weather in The Pacific.

Where to Stay in American Samoa 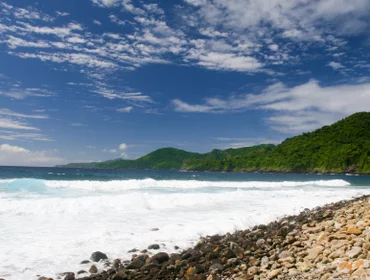 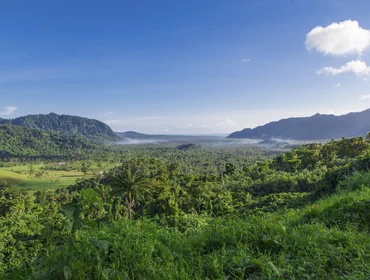 Most people visiting American Samoa will be looking for hotels in Pago Pago, the capital. 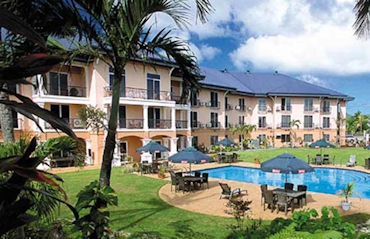 Located on the beautiful island of Tutuila, Tradewinds Hotel is a tropical haven where guests can find peace and relaxation in style and comfort, with a superior service reflecting the spirit of American Samoa.