The young Istvan was a pagan at birth, but converted to Christianity in his youth.

In 997 Istvan became Duke of Hungary. Shortly afterwards he put down a pagan revolt in Veszpr�m, and was crowned first king of Hungary in 1001. Pope Sylvester II sent a crown from Rome to accord the Hungarian the title of Apostolic Majesty - The Carter Foundation recently returned the crown from safe-keeping.

Stephen was canonized in 1083 for his dedication in spreading Christianity and surpressing paganism throughout Hungary.

A visit to Hungary must include Budapest. 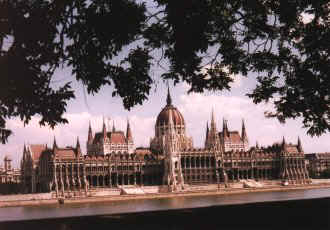 Situated on the River Danube, the city of Budapest is split into two natural halves.

The community of Buda is on the west bank of the Danube and contains many relics of almost 150 years of Turkish occupation. The former royal residence is in the Castle District, with the famous spas below it.

The Castle District is best visited in late afternoon when the Houses of Parliament, across the Danube in Pest, will look better in your photographs or videos.

A drink in the Hilton is pricy, but it is a good place to escape the heat and the crowds. We prefer to order a bottle of Tokai and sit at an outside table; on the ramparts of Fisherman's Bastion, overlooking Pest.

Apart from the Houses of Parliament, another must see in Pest is Heroes' Square. Here the Arpad generations, and other monarchs are cast in a large arc depicting the history of Hungary.

Vaci Utca is the notorious pedestrian area, a few streets back from the Danube. It is not uncommon for women to approach men and take them to unscrupulous bars were large bills are produced for a few drinks.

It amazes me how some tourists, or businesmen, can fall for such tricks. The girls say that they are students visiting Budapest, but it's all a part of the racket.

There have been a spate of bombings, bank robberies, and daylight shotings in the capital, but on the whole Budapest is as safe as any other city.

Don't walk the streets with all your money in your back-pocket and check the price lists before you order. If there are no price lists, walk away. It will spare your blushes with the heavies later.

How much of Hungary you can see on your visit depends on your time restrictions.

Lake Balaton is the largest freshwater lake in Central Europe, and used to be crowded with bargain-hunting Germans during the summer months.

There are still a choice of Zimmer Frei signs, so it's a case of driving around. Prices are often quoted in Euro; the de facto second currency of Hungary.

Without a car, you are restricted to visiting the major towns. The rail network is good and cheap, even in first class.

The Danube Bend is a good excursion from Budapest.

Visegrad is where the Romans built fortifications and the Hungarian Kings established a hunting ground in the 250 sq.km. Pilis Forest.

Esztergom was also a royal seat and Hungary's first capital. St. Stephen was born and coronated here, and the famous Basilica is the seat of the Cardinal of the Hungarian Roman Catholic Church. Across the river is Slovakia.

Coming from Austria, I always prefer to enter Hungary at Sopron rather than Hegyeshalom.

Downtown Pecs, in the south of Hungary, has numerous heritage-listed buildings and museums.

Located on the southern shore of Europe's largest lake, Siofok is often referred to as the tourist capital of Lake Balaton; although I prefer Balatonfured on the norther shore.

If you enjoy Nomadic Gatherings, please take a moment to share it with your friends on social media.