Bahrain at a Glance

The Kingdom of Bahrain is made up of 33 small islands in the Arabian Gulf, between Saudi Arabia and Qatar; the largest of which, is Bahrain itself.

Portuguese explorers who captured the island, in 1521, were eventually overwhelmed by the Persians in 1602.

To escape tribal wars in Central Arabia, the al-Khalifa family moved to the Gulf Coast in the 17th century and found a more prosperous life on the coast of Qatar.

The al-Khalifa family gained control of Bahrain in 1783, until British influence in the region forced them to accept a series of treaties.

From 1861, Great Britain started to control Bahrain's external affairs. Bahrain joined the Trucial States but, when the British withdrew, they elected to remain outside the United Arab Emirates.

Bahrain became an independent constitutional monarchy on 6th December, 1973. Since dissolving the constitutional national assembly in August 1975, the royal family have taken over as unchallenged absolute rulers.

In the 1980's, the Iranians tried to encourage revolution in the island and renew their claims to the emirate; but their attempts were thwarted.

Shiite supporters of a cleric have tried to call for a return to the national assembly but their demonstrations in Manama were quickly put down, in December 1994 and early 1995.

In 1999, Sheikh Isa took over as head of state after the death of his father, Sheikh Salman, becoming the ninth in a line of Bahrain's rulers from the al-Khalifa family.

Other principal islands in Bahrain are: Al Muharraq, Umm an Na'san, Sitrah, Jiddah, and the Hawar group.

Primarily a Muslim nation, Bahrain is considered to be one of the more liberal Arab lands.

Women are permitted greater leeway with dress, entertainment, and social access than in some nearby nations.

The Capital City of Bahrain is Manama

Declared a free port in 1958, Manama became the capital of independent Bahrain.

No visit to Bahrain would be complete without a trip to the souk, with its profusion of colours, sounds, and aromas.

Out and About in Bahrain

Tourist brochures are available from the various Bahrain provincial tourism offices. The main office is located on Adliya Avenue.

No visa is required for citizens of Saudi Arabia, UAE, Qatar, Oman and Kuwait, provided they bring all other travel documents. Any European national visiting Bahrain may receive an 'on-arrival visa' which permits them to stay for a maximum period of one week.

Bahrain Visas Online:
This is the only official website to apply for an eVisa to the Kingdom of Bahrain.

Bahrain is ruled by the Al-Khalifa family, and some of their palaces are worth a visit: Bahrain's Guest Palace being one of the more famous.

Behind the modernism of Manama is the old town with its decorative houses, rambling Arab souks, old mosques and the occasional date palm grove.

The Bahrain National Museum is situated on the intersection of the Muharraq Causeway and King Faisal Highway.

Bahrain Grand Prix:
The Bahrain International Circuit is located in Sakhir, behind the University of Bahrain.

Getting To and Around Bahrain

The 25 kilometre King Fahad causeway, between Saudi Arabia and Bahrain, was opened in November 1986; and with it came an increase in local tourism.

Weather in the Middle East.

Where to Stay in Bahrain 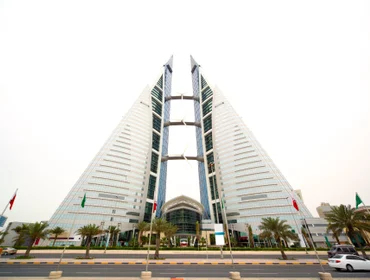 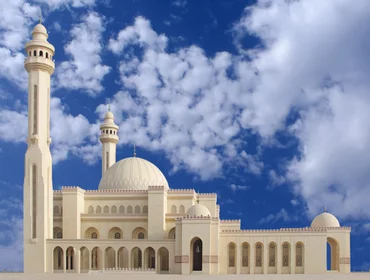 Most people visiting Bahrain will be looking for hotels in Manama, the capital.